Imagine being handed a recording of your son's last heartbeat.

In October 2013, this was the gift that Christine Perrelli received from her husband Anthony just hours after their 26-year-old son became an organ donor.

On April 6, thanks to musician Jarvis Green, choreographer Kerry McManus and volunteers from The AJ Project, Christine's dream of producing a music and dance piece inspired by AJ's heartbeat will come to life at the AJ Project's 3rd Annual Friend Raiser for Organ Donor Awareness.

"People ask me why I am started the AJ Project and why we choose to advocate for organ donation. What I tell them is here we are five years later and because of AJ’s story and The AJ Project I can still talk about my son like a proud momma. I get to brag of his accomplishments as an artists and his generosity as a donor.  I always hope that his story will inspire creatives to work hard and give back to the community."  Christine Perrelli, AJ's mother and  co-founder, The AJ Project

Create from the heart rehearsal 30 sec edit no voice over

We ask you to join us

Saturday, April 6th from 1-5 pm at Terrace on the Park, 52-11 111th Street, Flushing Meadows Park, as we feature the world premiere of the dance piece Create from the HeArt as well as work from other talented performers. Share the love with us, and enjoy lunch, live music, auctions, raffles and door prizes.

Tickets and sponsorship information at www.4theajproject.org. 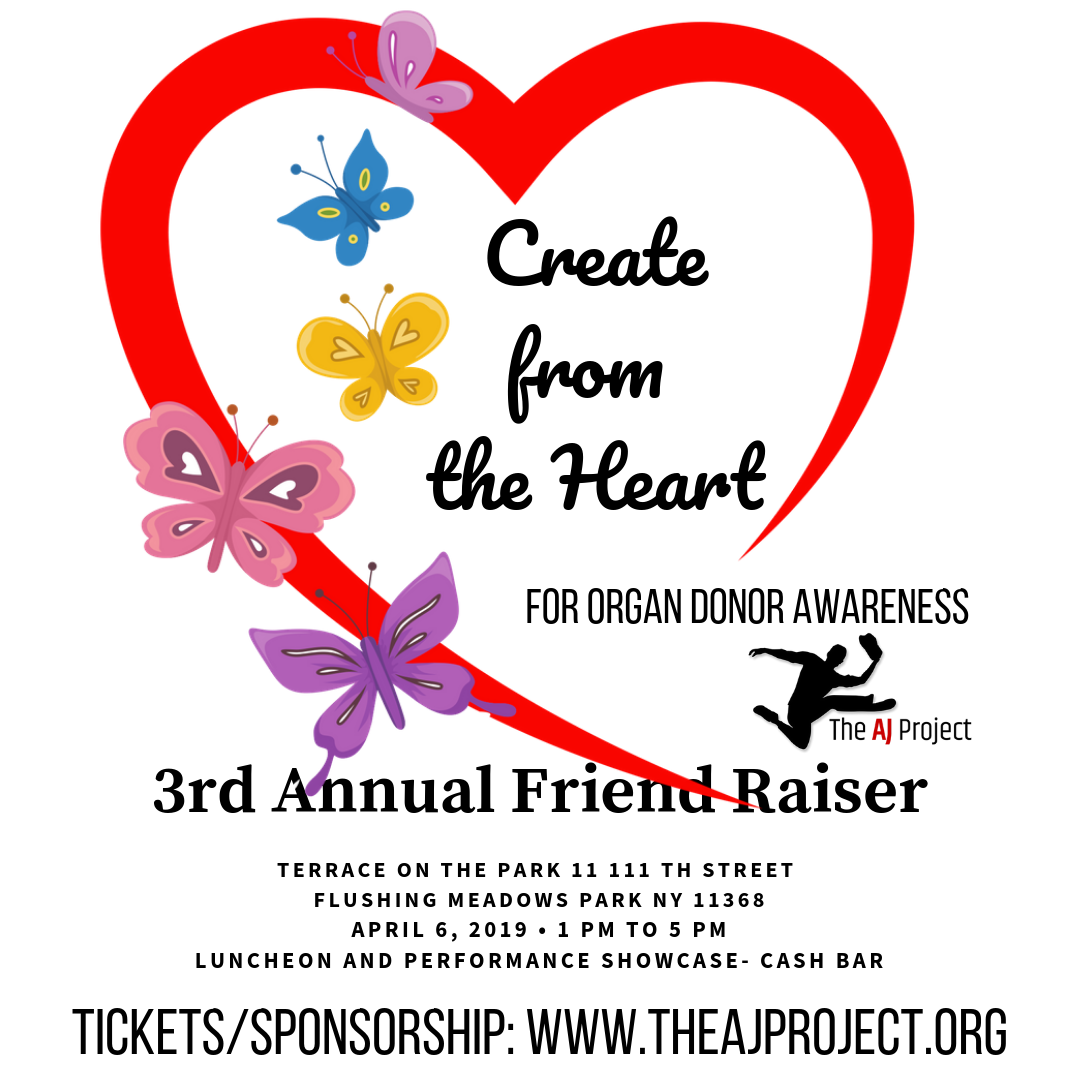 * Because of AJ, people world wide registered for organ donation-

* Not everyone is able to donate organs but there are other options such as tissue, corneas and bone options-

*Statistics provided by Unos and LiveOnNY

Why The AJ Project? The simple answer is #4AJ.

When AJ passed away, a fund was set up to help with his burial costs. After all was done, there was $800 still in the account. AJ's mother promised that any remaining money would be put into a fund for the arts in honor of AJ. The AJ Project was born.

This project exists as an extension of its namesake: AJ Perrelli's love of creating and connecting those who create. AJ was a professional dancer, singer, actor and artist who left us too soon at 26. His final casting call was as an organ donor. Because of AJ's generosity both in life and after his death, people worldwide were inspired to pursue their passions for the the arts and sign up as organ donors.

We are an arts org.

We bring professional and emerging artist together to raise funds and awareness to important critical issues and causes.

We champion the importance of organ donor registration.  Why? #4AJ

Permission is granted to use Youtube channel produced videos

Create from the heart rehearsal footage with voice over