The Videos are up from the Tony Viewing Party!!!! Check them out

Special Shout out to our friends Jeff Blumenkrantz, Amanda Lamotte, Heather Purcells and Natlaie Charles Ellis, live from Broadway, who helped out with the Trivia Questions!

and to our performers

Thank you to all who came out and had a fun night celebrating the Tony Awards with us at The Astor Room in Astoria!  Sign up for our newsletter to receive information about our upcoming events! 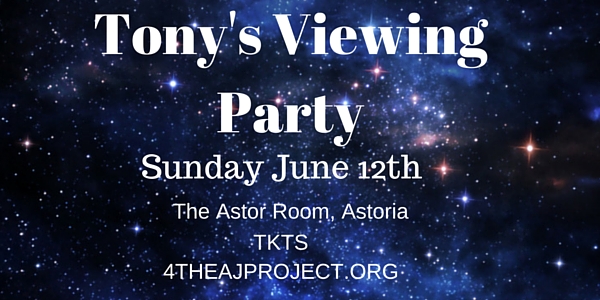 The evening featured special performances, trivia and raffles hosted by

Tickets were $20 in advance and $25 at the door which included 1 free drink and a light menu.

Want to host a Friendraising event in your area?  Contact [email protected]

CATE WEINBERG is a stand up comedian and actress born and raised in New York City. She heard about The AJ Project through Michael, Aj's brother. She hosts regularly at Stand Up NY and performs at The Creek and The Cave, Caroline's, and recently at The Stand. She produces the monthly show "Comedy Night at Snowdonia" in Astoria as well as "Straight Up and Dirty Comedy" at the Broadway Dive on the upper west side of Manhattan. She also writes, produces and acts in the web series "Dive Bar the Series." As a child her parents would play Light FM to help her fall asleep. As a result she is a melancholy soul with a shameless love of 80s and early 90s light rock. She can be seen in karaoke bars throughout the city performing "Careless Whisper." www.cateweinberg.com

HALEY CLAIR is an actor, singer, dancer, and voice over artist based in NYC. As an remerging artist she see The AJ Project as a place to network and connect as well as help others to find their artistic tribe.  Originally from Sonoma, CA, she has been the voice of several national commercials for notable brands such as Cricket Wireless, Spotify, and Audible Audiobooks, and has worked regionally in musical theater since the age of 16.  Favorite roles include Peter Pan (Peter Pan), Melpomene (Xanadu), Helene (Sweet Charity), Mrs. Thistletwat (Avenue Q), Sour Kangaroo (Seussical), and Judy (A Chorus LIne).  Haley is currently a member of the all-female pop a cappella group, Stiletta, who has headlined at Singstrong A Cappella Festival in Chicago and Washington DC, and who recently won the National Championship Title at the Harmony Sweepstakes competition.  She holds a BFA in Musical Theater from The Boston Conservatory.

KITTY PERRELLI is AJ's sister and like him a singer, dancer, actor and trains in cirque. Her credits mostly go back to her childhood where she was on stage in local theatre, dance troupes and in the recording studio with Barney the Dinosaur.  For many years she took a break from the studios and stage to study French Horne which led her to receive honors. At 16, she moved to NY and after graduating with musical honors she decided that the orchestra was not her passion. Currently she is a protege of vocal coach Badiene Magaziener teaching pop vocal studies.  She  dances with several event companies and is a model and actor. "When I first moved back to Astoria I was 16.  All I could see was a bunch of old people and was pissed that my flip flops were stuck under my bed because I had to wear snow boots.  Since then I have come to realize that our area is the place to be for emerging artists. No matter where you go here you will run into someone who does something that will mesh with your artistic life.  I am a dancer, singer, actor and hot yoga junkie and at first found it difficult to find my tribe.  It has taken time but with the help of The AJ Project I hope the next person to move to NYC has a place to help them feel at home."

ALEXANDER SAGE OYEN is the recipient of the 2014 ASCAP Foundation’s Lucille and Jack Yellen award for lyricists. His musicals include OUTLAWS (Goodspeed Festival of New Musicals- book by James Presson, dir. Noah Himmelstein), ARCHIE'S FINAL PROJECT (Book by James Presson and David Lee Miller), DIVA (book by Sean Patrick Monahan), A NIGHT LIKE THIS (book, music, lyrics, directed by Blayze Teicher, 54 Below) and MOMENT BY MOMENT (directed by Brandon Ivie, 54 Below. Production at Mahidol University, Bangkok, Thailand). He and collaborator James Presson were awarded the 2013-2014 Dramatist Guild Fellowship and their musical, OUTLAWS, was the recipient of the 2014 ASCAP Workshop. He was named one of Playbill’s “Contemporary Musical Theatre Writers You Should Know,” and he was selected for the 2014 Johnny Mercer Songwriter’s Project. His music has been heard at Lincoln Center, Goodspeed Opera House, Symphony Space, 54 Below, Joe’s Pub, Playwrights Horizons, The Signature Theatre, New World Stages, The Laurie Beechman Theatre and venues in Thailand, London, The Netherlands and all across the world. The cast album for his song cycle, MOMENT BY MOMENT, is available for purchase on iTunes and Amazon. Proud member of ASCAP and The Dramatists Guild.

RACHEL LAURIA originally from Atlanta GA, began her performance career as a Character/Parade Dancer at Walt Disney World Orlando. A graduate from the New York Film Academy’s Musical Theatre program, she then went on to play Tracy Turnblad in Festival South’s Production of Hairpsray. She started her choreography career by assisting many choreographers in New York with the Theatre Arts Center including Steven Cardona, Luis Salgado, Tony Gonzalez and many more. She recently assistant choreographed the production of Mary Poppins and West Side Story with the University of Southern Mississippi. Rachel has been fortunate enough to assist Steven Cardona with many other projects including the Little Orchestra Society’s “Gershwin’s Got Rhythm” as well assisting on the development of his new show  “Pandora.” Rachel is also a Cize Live Fitness Instructor at Steps on Broadway,and NYSC and performed as a backup dancer in the Next Level Series with Shaun T. She is also very excited to be a new member  of the Katharine Pettit Creative Dance Company.  She continues to do projects and develop choreography in New York. Other choreography credits include Legally Blonde the Musical, The Sound of Music, The Wiz, and Pump Boys and Dinnettes.  She would like to thank Steven Cardona for this amazing opportunity to perform and for always believing and supporting her!

"Adulting" as an artist is really hard and The AJ Project makes it easier!

Currently we are an online resource located in Astoria, NY. "Actoria", as it is known by the locals, and it's next door neighbor Long Island City (LIC) are considered a hub for creative artists to live. The city even officially deemed our area an official arts district which includes Kaufman Astoria Studios and the Museum of Moving Image. LIC has a long list of dance, art and production studios to add to the list.

What is lacking however, is a complete working resource center for the up and comer.  Call it a welcome center of sorts. Our dream is to open a Art Works Hub were services needed to succeed would be offered through an exchange or highly discounted from our affiliated partners or through direct access to technology onsite. We hope to include website development, branding and marketing resources, recording and editing services.  Our ultimate goal is to open locations in metro areas where creatives go like NY, LA and Nashville.

CHRISTINA NEUBRAND (Program Director The AJ Project) Christina met AJ in 2009 while visiting a friend in Spain who happened to be on the same Disney Live tour. They connected immediately and stayed in touch. Ironically, they both ended up in NYC in 2010. At The Looking Glass Theatre, Christina cast AJ in his first NYC play. From there, she continued to support AJ as he began working toward a life in New York in the arts. No matter how busy AJ was he made it a point to support her artistic endeavors, be there as a true friend and ultimately became a very important part of her life.  Christina holds a BFA in Theatre Performance from StephenF.AustinStateUniversity and an MA in Educational Theatre from New YorkUniversity’s Steinhardt School of Culture, Education, and Human Development Department of Performing Arts Professions. She is currently a freelance arts education practitioner, curriculum developer and is working with Power Brain Education to develop schools that promote holistic learning. Christina is excited to be a part of The AJ Project and looks forward to its future!

CHRISTINE PERRELLI (Executive Director of The AJ Project and AJ's Mom) aka "Momma P" to many. It is with great pride that she leads The AJ Project and its endeavors to foster the life skills and the talents of emerging artists just as she did for her son. As a mother of four very artistic children and wife of a freelance cameraman and editor, Christine found that her Type A personality was a strong balance to the creative forces that surrounded her. Christine recognized and was fully involved in AJ's love for entertaining and encouraged him to try a variety of outlets and artistic disciplines.

Professionally, Christine owned a video production events company and was also the director of sales and marketing for a major corporation. She was one of the first females to land a position as a director of audio visual for a major NYC company, and she has also been successful in the world of real estate. Christine is looking forward to connecting with artists of all types and reaching the world with The AJ Project! [email protected]